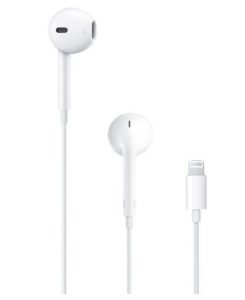 Apple EarPods with Lightning Connector rather than a 3.5mm analog stereo connection.

It Suitable for iOS devices sporting an 8-pin Lightning port. Each speaker inside the earphones is designed to maximize output, and as such, delivers a deep, rich bass response. An inline remote allows you to adjust volume, control playback of music and video, answer or end calls, and communicate with Siri.

What’s in the Box:

Works with all devices that have a Lightning connector and support iOS 10 or later, including iPod touch, iPad, and iPhone.