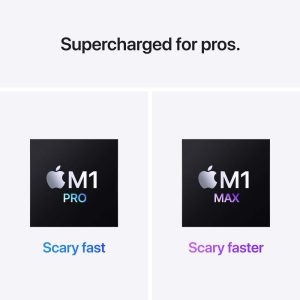 The Macbook Pro 10-Core CPU features eight performance cores and two high-efficiency cores. The 16-Core Neural Engine provides support for on-device machine learning acceleration and improved camera performance. The M1 Pro offers up to 400 GB/s of memory bandwidth as well as support for up to 64GB of unified memory. The efficient architecture of M1 Pro means they deliver the same level of performance whether MacBook Pro is plugged in or using the battery. With up to a 32-Core GPU, the M1 Max can provide up to four times faster GPU performance than the M1.

Features the Apple M1 Max 10-Core Chip, which provides the power and performance needed to handle your professional workflows. The 14.2″ Liquid Retina XDR display features a 3024 x 1964 resolution, 1,000 nits of sustained brightness, 1,600 nits of peak brightness, P3 color gamut support, and more. With up to 4TB of SSD storage, you’ll be able to load massive files and launch apps quickly, enabling you to work with photo and video libraries from almost anywhere. 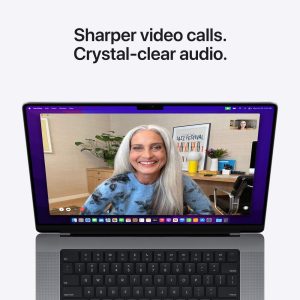 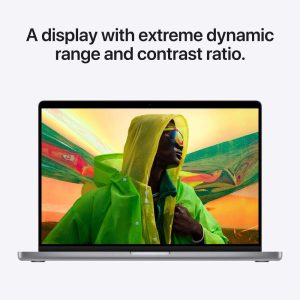 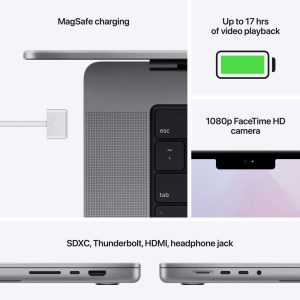 Featuring 14.2″ Liquid Retina XDR display. Delivering up to 1,000 nits of sustained, full-screen brightness, a high 1,600 nits of peak brightness, a 1,000,000:1 contrast ratio, and a billion colors, the Liquid Retina XDR display can handle the extreme dynamic range of HDR content, providing detailed shadows, brilliant specular highlights, deeper blacks, and vivid colors. The display is less than 4 mm thin, which is achieved by having seven films and diffusers that mix and shape the light efficiently. The oxide thin film transistor (TFT) allows pixels to charge twice as fast as before.